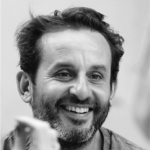 Jérome believed in Climate Fresk  from the very beginning! As one of the first people to test the game, he immediately felt its power and was moved by the sincerity of Cedric’s initiative.

Though he doesn’t often facilitate, he takes a very active part in the development of Climate Fresk.

In his professional life,   Jerome is focused on contributing to a sustainable world. He founded  ENGAGE, on a mission to give everyone the opportunity to participate in building a sustainable society. He aims at freeing people’s creative potential. He is also the co-creator of the Grand Défi des Entreprises pour la Planète. This challenge is a participative initiative that federates economic stakeholders and civil society to accelerate the transition of the economy and implement a sustainable model for all.

He brings all his expertise to Climate Fresk, particularly his experience in social projects development. He works with Cédric and Frédéric on a daily basis, and makes the most of his extensive network in the social and environmental ecosystem, as well as his knowledge of the economic, societal and cultural sectors.

The ENGAGEco-working space is the headquarters of the Climate Fresk’s permanent staff and hosts many workshops, evenings and weekends.

His personal interests: he is passionate about the implications of climate change on economic and political systems. He likes to study the links between climate and biodiversity and wonders about the narrative that needs to be invented around global warming to foster action.

His special touch: with his appeasing sense of humour, he brings a touch of sensitivity and art in our environment.