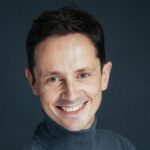 After a 17-year career in management consulting, working for for large companies, Frédéric has been dedicating his professional life to the climate emergency since 2018. With Climate Fresk on the one hand and his company Caristeo on the other, Frédéric promotes awareness  and action. In his career, he’s gained the skills and knowledge needed to help large companies to overcome their blocking points. He contributes to transforming organisations from the inside, harnessing the energy of a few committed individuals to embark others and bring them to accept the harsh truth they are confronted with.

“As a father of two little girls, I draw my energy from the vision of the world I hope to leave behind for them.“

His specific interests: he is inspired by change-makers, all those who dare to do what might appear to others as impossible.

His special touch: he loves the stage, in its different forms (theatre, conferences…). He loves animation, group dynamics and collective intelligence