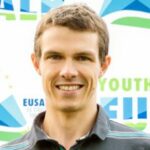 Blue Belt, coordinator for German-speaking Switzerland, new member of the Board

Ludovic has contributed to Climate Fresk through a number of different ways in the past (CEKOs, working groups, partnerships…). He has been coordinating Climate Fresk’s development in Switzerland in all 3 national languages for over a year, since December 2020. In collaboration with the other freskers in the country, he’s contributed to winning the ClimaNow call for projects! In October 2021, along with other freskers, he cycled from Paris to Glasgow to join the COP26 Climate Fresk delegation. Putting aside his former job, he confirmed his purpose: to increase his personal impact tenfold by dedicating himself to ClimateFresk, while contribution to transforming organisations from the outside.

As he used to be a project manager, deployment programmes hold no secrets for him.  This experience is a strong point for Climate Fresk. He understands the importance of moving things forward, even when they are shifting, and knows to stay flexible whilst doing so…. By joining the Board, Ludovic hopes that 2022 will not only be the year of quality for Climate Fresk but also of massive internationalisation.

“I don’t have any children, but I have many nieces and nephews! That’s what makes me want to act, to show those around me that it’s possible to make changes, based on such motivations.“

His specific interests: everything! He loves to learn and is passionate about multicultural and international issues.

His best qualities are his communicative energy and motivational skills. In his spare time, he is an fierce mountaineer.