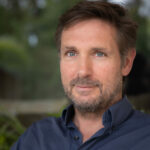 President and founding member of the association

Cédric Ringenbach has been President of the Board since 2018, with his current mandate running  until 2025. As such, he nominates the Secretary General and the Treasurer. This year, they are respectively: Jérôme Cohen (Secretary General) and Fréderic Giuli (Treasurer). As you all know, Cedric is the creator of Climate Fresk.

His bio in a nutshell...

Aside from his functions within Climate Fresk, Cédric is an engineer, lecturer and consultant specialised in energy transition for companies and organisations. He has been a climate change specialist since 2009 and led The Shift Project from 2010 to 2016. He teaches courses on energy and climate issues in prestigious French universities such as Sup’aéro, Ecoles Centrales, Sciences Po or HEC.

...and the long version

His story and that of the association are intrinsically linked

Cédric is an engineer, trained at the Ecole Centrale de Nantes. After fifteen years in IT  project management, and a brief bracket in oenology, he dived into the climate change issue in 2008. In 2009, after reviewing the technical summaries of the fourth IPCC report, he began looking for a way to earn a living while contributing to the fight against climate change.

From 2010 to 2016, he led The Shift Project, a think tank focusing on climate and energy,chaired by Jean-Marc Jancovici.

In 2015, during a course on climate, Cédric experimented with what would then become the Climate Fresk workshop with his students for the first time. He asked them to put fifteen IPCC graphs in order of cause and consequence. Seeing them interact together, he realised the great educational potential of this exercise and decided to repeat the experience in other classes. He developed the material into its current form and shared it under a Creative Commons licence.

In March 2018, the Leonardo da Vinci management school called on him for a massive workshop roll-out: 150 workshops for 900 students. He quickly trained 30 facilitators, and they became the first Freskers. The roll-out was a major success! It became obvious that the tool was ready: not only could it be shared with anyone, but anyone could learn to use it in a few hours.

“I thank you all for the energy, the dynamism and the time you give to the Climate Fresk. We are united in the fight against global warming through climate education. Together, we will get there.“

His special touch: Cédric is also the creator of an oenology game, but he chose to focus his efforts on Climate Fresk to fight against global climate change. He is also currently learning permaculture and is interested in the human dimensions of the ecological transition. He is a member of the board of the Université Populaire de Permaculture. He also delivers introductory sailing and permaculture courses in Brittany during the summer, with the help of the Glénans sailing school.