Since the summer, three British higher education institutions have successfully rolled out the Climate Fresk tool to their students and university communities! 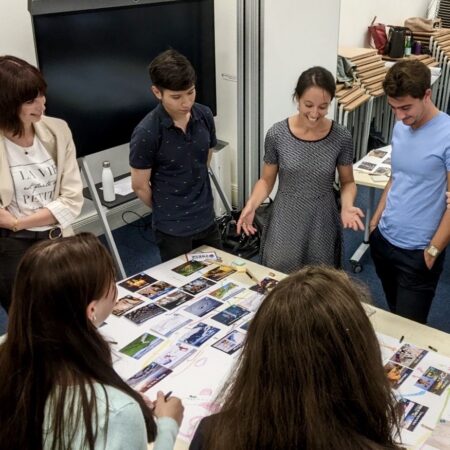 The University of Strathclyde, Imperial College London and the ESCP London campus all organised workshops and training sessions, for more than 430 students and teaching staff.

These important milestones highlight the growing presence of Climate Fresk implementation in the UK, paving the way for large-scale roll-outs across universities and other organisations. These events were made possible by the efforts of our UK facilitator community, which is made up of more than 450 freskers. Let’s take a closer look at each of these events, which were widely praised by those who took part!

Located in Glasgow, the University of Strathclyde is one of the largest universities in Scotland. At the end of 2021, the university jumped at the chance during COP26 to organise a series of Climate Fresk workshops and training sessions, all whilst hosting 167 freskers who took part in COP. Continuing to be impressed by the Climate Fresk tool, the university made plans during the summer to roll out the workshop to its students and internal community, on a large-scale format, during the start of the new academic year.

With the help of 3 facilitators and 2 trainers from our UK community, 40 staff members from Strathclyde took part in a workshop, and half of them were then trained as facilitators. Since then, the Strathclyde Climate Ambassadors’ Network has been created to help spread climate education within the university and the wider community via the Climate Fresk tool.

This effort is being recognised on a national level, as this project has been announced as a finalist in the Green Gown Awards UK & Ireland, which recognises the exceptional sustainability initiatives being undertaken by universities and colleges.

In one day, more than 170 students and staff members took part in a Climate Fresk workshop at Imperial College London, one of the UK’s most prestigious universities. A large proportion of the workshop participants were students from their Masters in Climate Change, Management & Finance, as well as from their MBA programme. This large-scale operation was run by 12 of our UK facilitators.

Spurred on by this first success, Imperial College London is now going to run a programme in November to train students and staff members that want to become facilitators, in order to eventually roll out Climate Fresk autonomously within the university.

ESCP’s pilot project to be expanded

In September, ESCP London, a major French business school, called on 13 British facilitators to raise awareness of climate issues among 175 of its Masters in Management students. 18 other students were also trained as facilitators at the same time.

This momentum continued through to the end of September, when workshops were held for 34 students, this time from their MBA programme. The business school is now working in collaboration with the Climate Fresk community to create opportunities for the newly trained facilitators, in order to accelerate the spread of the Climate Fresk tool internally, and to wider external audiences.

The overall feedback from the workshops show that Climate Fresk was very well received by participants. At Imperial College London, students expressed their enthusiasm for Climate Fresk: 100% would recommend the workshop to others, a 8.5/10 rating was given to the workshop as a climate education tool, and an average rating of 8/10 was given as an experience to get to know other students.

Climate Fresk workshops offer a highly engaging, fun and interactive way of bringing an understanding of the causes, effects and impacts of climate change to our students, helping them understand more deeply ‘the climate problem’ and inspiring them to consider what needs to be done to find a sustainable, systemic solution, and the role they can play in achieving this as agents of change and through their future careers.

This feedback encourages us to continue to spread Climate Fresk to these universities, and more broadly to other educational institutions and organisations across the world!