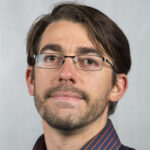 Gironde Coordinator, member of the Board since January 2021

François Joseph, aka FJ, is a blue belt very involved in the local deployment of the association.  He runs workshops for the general public, CEKOs, the Climate Mandate and in companies as a professional.

He has worked for more than 10 years in the IT sector as an engineer.  After he realised the general fall-out of the sector on the environment, he moved on  to climate/energy issues and global limits.

When he still does digital work, FJ does so within the Datagir team at ADEME, to increase the impact of the agency’s data and tools. Datagir is in charge of Nos Gestes Climat, well known by freskers, and of other very practical calculators used to raise awareness.

His personal interests: as a lover of complex and systemic thinking, he is driven by the challenges we face: planetary limits, inequalities/injustices, resources, etc. Beyond raising awareness, he wishes to reconcile individual and collective actions and participate in creating other imaginaries.

His special touch: he is also a member of Climate Resistance (Résistance Climatique). Very curious, he likes to learn, to make connections (like in a workshop!) and to pass on knowledge.