An amazing year for Climate Fresk!

2022 is drawing to an end and it’s a good time to take a look back on these incredible past 12 months. The NGO continued its exponential growth, aided by its remarkable progress on the international scene! 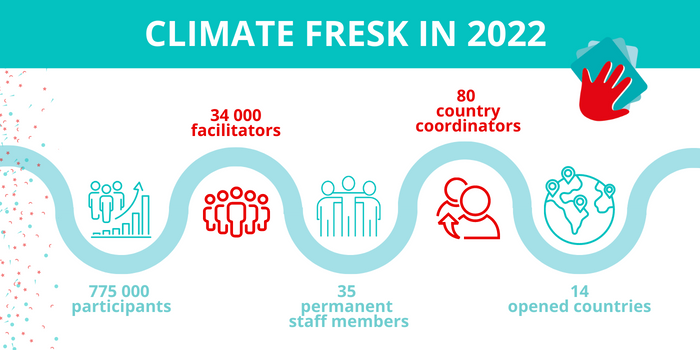 While the international community had just 1,650 Freskers at the end of 2021, it now has over 6,000 facilitators, spread across more than 55 countries! Thanks to them, more than 96,000 participants were able to attend a workshop outside France.

The community in France remains Climate Fresk’s main driving force as of today, with its 28,000 facilitators having spread climate education to over 679,000 people. However, the increase in the international community’s influence is also significant, as the proportion of workshop participants outside of France keeps on growing.

This quantitative development has gone hand in hand with a notable improvement in skills! While 34 new country coordinators have joined the NGO’s international community, securing a presence in 14 new countries, more and more participants have passed their belts. Congratulations to our 34 new green belts and 3 new blue belts, who will considerably add to our training capabilities worldwide!

To ensure the best possible support for this expansion, the team of permanent staff has also grown. We were 16 in January 2022: we’re now a team of 35, with 9 people specially devoted to the needs of the international community. Among them, two project leaders are providing back-up to the British and Swiss communities. We will present the team to you next month!

In discussing the major advances of the year, we of course have to mention the launch of the platform. Workshops and training sessions are now easier to organise! It also centralises facilitation opportunities, whilst automating the Fresker’s journey. It is specifically designed to accompany the Fresk’s internationalisation, thanks to its multilingual and multi-currency system, and the establishment of standardised pricing adapted to the national contexts for the workshops open to the general public. On top of that, it now includes an area devoted to professional opportunities.

As the website is the NGO’s number-one communications tool, the publication of its Swiss German, Swiss French and Spanish versions are also an important step towards expanding our international public.

At the same time, we supported our Freskers on all five continents with the translation of numerous resources, the subtitling in several languages of the Facilitation MOOC and the Junior MOOC and the setting up of meetings devoted to international white belts. The English-language version of the MOOC should be available soon. Stay tuned for that!

A community involved in major events

Alongside its daily involvement in raising awareness as widely as possible, our community can also take pride in its participation in several international events this year. Participants from several African countries were fresked during the World Water Forum, which took place in Senegal in May. A few days later, in June, the Stockholm+50 Conference, jointly hosted by Kenya and Sweden, demonstrated the Fresk’s ability to mobilise and convince people across borders.

The high point of the year was COP27, where the Climate Fresk delegation contributed to world reflection on climate education through its participation in various round tables and conferences. The event was also an opportunity to establish contacts in more than 60 countries, to raise awareness among diverse groups, including people in positions of high responsibility, and to reinforce the Egyptian community and the Fresk’s presence in the Arab world and on the African continent.

Many countries saw significant milestones this year. For some, like Kyrgyzstan and Panama, it was the birth of their Fresker communities; for others, the setting up of regular workshops for the general public, or the unprecedented impact made by their flagship programme, for example the CEKO (Climate Education Kick-Off) in the United Kingdom. Some of our coordinators won awards, as in Australia, while our Rumanian and Vietnamese communities represented the association in national events on climate change.

We’ll meet up again in January to share the NGO’s resolutions for 2023. A big thank-you for this incredible year, and we wish you an excellent festive season!